John Pierpont Morgan Sr. (April 17, 1837 – March 31, 1913) was an American financier and banker who dominated corporate finance and industrial consolidation in the United States of America in the late 19th and early 20th centuries. 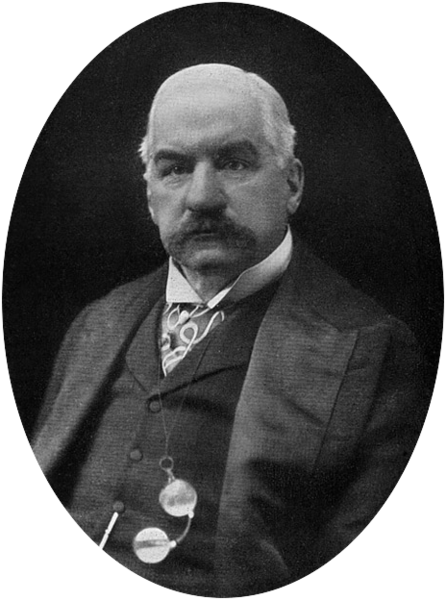 In 1892, Morgan arranged the merger of Edison General Electric and Thomson-Houston Electric Company to form General Electric. He also played important roles in the formation of the United States Steel Corporation, International Harvester and AT&T.

At the height of Morgan’s career during the early twentieth century, he and his partners had financial investments in many large corporations and had significant influence over the nation’s high finance and United States Congress members. He directed the banking coalition that stopped the Panic of 1907.

He was the leading financier of the Progressive Era, and his dedication to efficiency and modernization helped transform American business. Adrian Wooldridge characterized Morgan as America’s “greatest banker”.

Morgan died in Rome, Italy, in his sleep in 1913 at the age of 75, leaving his fortune and business to his son, John Pierpont Morgan Jr. Biographer Ron Chernow estimated his fortune at only $118 million (of which approximately $50 million was attributed to his vast art collection), a net worth which prompted John D. Rockefeller to say: “and to think, he wasn’t even a rich man.”

About the Author: Maestro Cursos